Post Grant Review (PGR): A post-grant review (PGR) is a way of questioning a patent’s validity. PGR was introduced by the America Invents Act (AIA) on September 16, 2012, as a counterpart to the Inter Partes Review (IPR) procedure.

These three administrative law judges are members of the Patent Trial and Appeal Board (PTAB), which replaced the old Board of Patent Appeals and Interferences (BPAI) within the USPTO.

In the old system of inter parties reexamination, an appeal of an adverse decision by a patent examiner was handled by the BPAI, followed by request to a federal court. 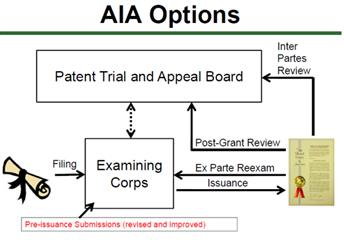 PGR can be filed immediately after patent issuance or reissuance, and IPR can only be filed after the period for post-grant review has passed or if no PGR is filed then nine months from the date the patent is issued (or reissued).

IPR can only be filed based on the grounds of anticipation and obviousness, whereas PGR can be presented based on any properties that can be used to challenge the validity of a patent claim.

Such as anticipation (§ 102), obviousness (§ 103), patent eligibility (§ 101) and lack of compliance with written description, enablement or indefiniteness (except for best mode) (§ 112). Prior art for PGR is not limited to patents and printed publications.

Indeed, PGR can be sought by alleging unpatentability based on evidence of public use, on-sale activity or other public disclosures, double patenting, lack of patentable subject matter. In short, PGR can be filed on any ground whereas IPR can only be filed on two grounds — anticipation and obviousness.

For patents examined under the first to invent rules (i.e., patents filed before March 16, 2013), IPR can be initiated immediately following issuance (or reissuance) of patents, since the post-grant review is not applicable for these patents.

For patents examined under the AIA first to file rules (i.e., patents filed on or after March 16, 2013), PGR can be initiated immediately after the patent is issued and IPR can be commenced after the nine months window of eligibility for post-grant review.

Choosing between PGR and IPR?

Once a final written decision is issued by PTAB, the estoppels is created as a result of an IPR or PGR that prevents a party from arguing before the USPTO, district court, or International Trade Commission, invalidity of a claim that was determined to be valid or patentable on any ground which that party raised or could have raised during proceedings IPR or PGR.

Given the additional types of validity challenges and range of prior art available in PGR, the estoppel effects of PGR can be significantly higher than those of IPR.

If a party used all of the available prior art for PGR and failed to convince the jury of PTAB, then the party to an unsuccessful PGR may find themselves back in the district court with limited options to challenge the patent’s validity based on prior art, Section 112, or other grounds because of estoppel.

Most of the petitioners prefer IPR over PGR. According to the USPTO statistics, 820 IPRs were filed in 2018 through April 30th.

On the other hand, only 35 PGRs were submitted during the same period.

From the time of introduction through April 30th, 2018, the number of PGRs filed were 113. This count is nowhere near the 7,775 IPR filings.