The main objective of the reexamination is similar to other revocation proceedings conducted at the administrative level by the patent office, such as post-grant opposition or invalidation. Meaning, it provides a relatively quick and inexpensive alternative to litigation to reconsider the validity of an issued patent in view of new prior art or on other grounds, as provided in the applicable law to correct a patent which was inadvertently issued.

Generally, in many countries, the re-examination is conducted by a single examiner or the division of the patent office which has granted the patent earlier, in comparison to a full opposition board in the case of post-grant oppositions.

In the United States of America, there are 3 methods of re-examination

These provisions resolve patent validity disputes more quickly and less expensively than litigation, permitting courts to defer issues of patent validity to the expertise of the USPTO. The re-examination proceedings allow anyone, including the patent owner, to file a request for re-examination of any claim of a patent by providing the USPTO with a written request for re-examination accompanied by the fee, the relevant prior art, and the manner of applying the prior art to the claim(s) at issue.

It was enacted in 1980. The requester, other than the patent owner, has no right to participate in the appeal. The identity of the real party in interest may be kept confidential, as an attorney representing the real party in interest may file the request. The ex parte re-examination procedure is ordered only when there is “a substantial new question of patentability” in at least one claim of the patent. If there is no such “question”, no re-examination can be initiated.

IPR was introduced by the Leahy-Smith America Invents Act (AIA) of September 16, 2011, which took effect on September 16, 2012. The inter partes review is conducted by the Patent Trial and Appeal Board to review the patentability of one or more claims in a patent only on a ground that could be raised under 35 U.S.C. §§ 102 or 103, i.e., novelty and non-obviousness and only on the basis of prior art consisting of patents or printed publications. The inter partes review process begins with a third party filing a petition after the later of either: (1) nine months after the grant of the patent or issuance of a reissue patent; or, (2) if a post-grant review is instituted, the termination of the post-grant. 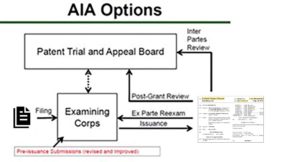 A post-grant review (PGR) is a way of questioning a patent’s validity. PGR review is conducted by the Patent Trial and Appeal Board and is the only reexamination procedure with a time limitation i.e. it can only be filed within 9 months from the date the patent is issued (or reissued). PGR was introduced by the America Invents Act (AIA) on September 16, 2012, as a counterpart to the Inter Partes Review procedure.