As we all know, an invention that is novel or non-obvious is patentable but is it the same scenario in software or the computer programs? Well, at times when a new software arises, there always exists a question of whether it is protected or not!

Today’s world entirely relies on software and computer technology. To patent the software is a very complicated field. There are multiple reasons for software patenting complications that made the US patent office host for a grant in silly and unworthy software patents. The primary importance of the software to be patented is the danger of acquiring the human thought process. Since this point is valid, software development was evolved, believing the importance. So, it is no wonder that software protection is crucial not only for the software industry but also for other businesses.

The petitioner Diamond and the responder Diehr was one of the most interesting cases in history, making the patenting software evolve more. James Diehr has invented an improved press that cured rubber by controlling heating. A temperature probe that measures the rubber’s temperature rise within the press calculates the rubber cure time and compares it with the elapsed time. The computer program determined this calculation. The patent examiner at the supreme court has rejected it earlier. But when the inventor’s attorney has argued for it, saying the steps of continuously measuring temperature and repeatedly recalculating the rubber cure time and comparing it to the elapsed time were new steps worthy of patent protection. Thus, the patent is granted.

After thirteen years of Diamond versus Diehr, the Court of Appeals for the Federal Circuit, in re Alappat, virtually all the computer programs or software are patentable. The federal circuit mentioned that very accurate testing and inquiry should be made with the application while issuing a patent to any computer program. Suppose a claim contains a mathematical formula, mathematical equation, mathematical algorithm, or the like, which is applied in a structure or process, when considered a whole, having a unique application. In that case, such kind of inventions is patentable.

The software is patented in a few jurisdictions. In the US, the federal circuit’s recent decision has made many inventors believe in the software to be patented. It is patented only when it is novel, non-obvious, and attached to a machine. In other words, we can never patent a process that is running in the head. Still, if that process grips a concrete apparatus, such as a computer, then it is eligible for patenting, and patent right is given if it is novel. The patent office checks whether its uniqueness grants a patent. But how can one test a software patent is another question to be answered? In the process of testing, many cases came into existence and have put the software testers in confusion, which has made them update the testing methods as follow:

3. As per MPEP (Manual of Patent Examining Procedures), the test is, any computer program involves making any changes in the hardware or the program is embedded in any hardware. Such types of programs/software can be patentable. And the courts have conducted many tests to make sure whether the invention is patentable or not. 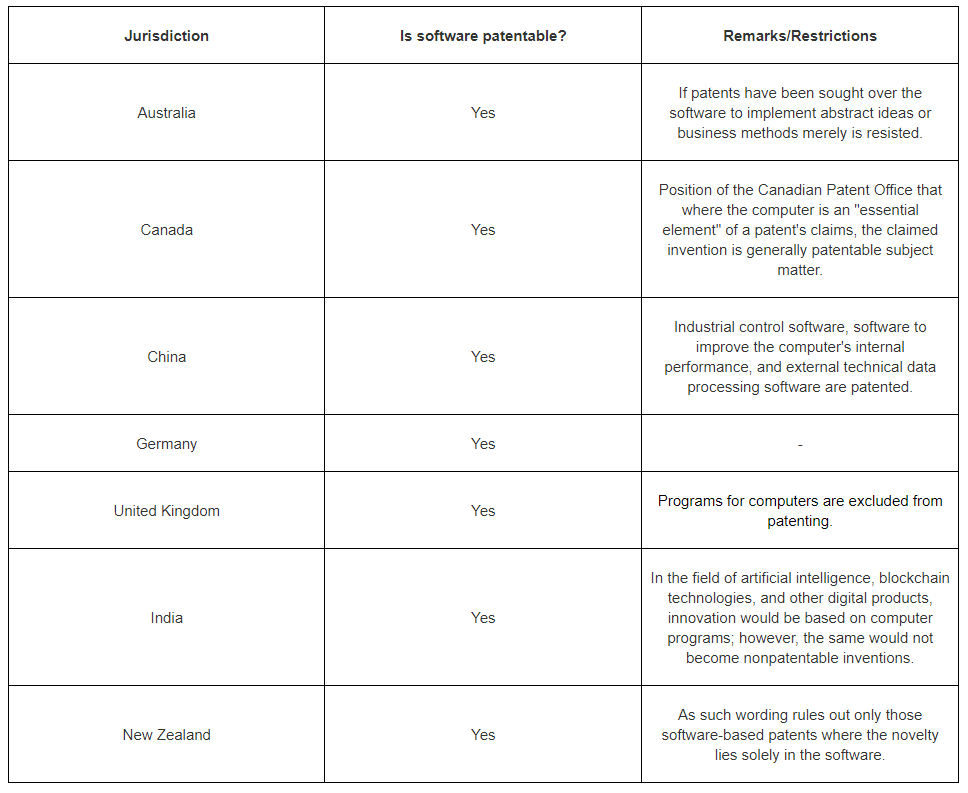 The law of patenting software is not the same in all the world’s jurisdictions and are different for different countries. Though many countries have considered the software to be patented, they have some restrictions on granting a software invention.

As an answer to the titled question, yes, the software can be patented. Undergoing a few rules and considering a few restrictions in different countries, one can file a patent application for software. As the world is into digital processing, the number of patents in the software increases in many nations.